WinDirStat is a disk usage statistics viewer and cleanup tool for Microsoft Windows.

On start up, it reads the whole directory tree once and then presents it in three useful views: 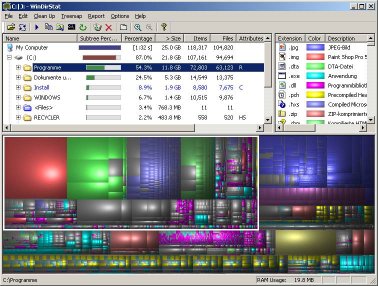 The treemap represents each file as a colored rectangle, the area of which is proportional to the file’s size. The rectangles are arranged in such a way, that directories again make up rectangles, which contain all their files and subdirectories. So their area is proportional to the size of the subtrees. The color of a rectangle indicates the type of the file, as shown in the extension list. The cushion shading additionally brings out the directory structure.

The program is great, but sometimes your space isn’t being consumed by large files, but by many smaller ones that could be duplicates, or at least very similar. That’s where an app such as Fast Duplicate File Finder comes in handy.

Most of my drives are taken up either with backups, videos or games, and I imagine most have a similar breakdown. Between the aforementioned programs, CCleaner and the low price of magnetic HDDs, I’m able to run a tight ship, but I’m interested to hear what you guys use.

And here is the app…